Mrs. Constance George is a highly influential member of The Court of Spring. She is one of the wealthiest changelings in London, owing to the wealth of the George family, which she holds significant sway over.

Mrs. George was born into the George family, an old money family from the Knightsbridge area of London. She was married had at least one child before her abduction to Arcadia.

Mrs. George has admitted she doesn't remember much of her captivity and is pleased about it.

"When Aunt Constance wants you to do a thing you do it, or else you find yourself wondering why those fellows in the olden days made such a fuss when they had trouble with the Spanish Inquisition." -Thomas "Potty" Porter

Mrs. George returned and quickly moved into the retinue of Victoria of Spring. Fearsome and strong-willed, she is seen as the steel in the spine of Spring. As the defacto leader of The Old Guard Mrs. George is the only member of the court who has influence and power approaching the Queen of Spring. She maintains a good deal of control over her mortal family who far too often finds themselves bent to her indomitable will.

When one of her great-great grandnephews Matthew Bramsetter goes missing she insists that an investigation (or "Quest") be launched immediately. She pushed for the execution of his supposed killers. Some days later, Mrs. George was one of the many participants wagering on the First Edition of Frankenstein.

During the 2010 Games of Fortune, Mrs. George was a vocal supporter of The Posh, going to support them in several rounds. Through either design or random fate Mrs. George encountered Trouble Ahead on several occasions. When one of her grand-neices Susan Marshall was deflowered by Gram Thew as part of the second round, Mrs. George was furious and ordered the Posh to win a round of the game they apparently were going to throw.

She also met the members of Trouble Ahead at the Fitz-Greyson nuptials where she assisted them in leaving despite her apparent personal dislike for them.

Impressions caught out of the corner of your eye of Mrs. George because she is scary and you don't want to be on her bad side[] 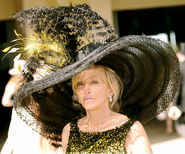 Mrs. Constance George is not amused.

A Blue-Haired Bitch with a Big Hat
Community content is available under CC-BY-SA unless otherwise noted.
Advertisement