Empire Wiki
Register
Don't have an account?
Sign In
Advertisement
in: Court of Albion, Fairest, Imperial,
and 2 more

The Empress Victoria is the current Imperator of Roses, High Empress of The Empire of the White Tower. She rarely makes public appearances, and by convention does not interfere with the day-to-day running of her Empire. Her primary power and responsibility as Empress of the Empire is to declare the start and stop of each season, thus granting power to one of the four rotating Seasonal Courts.

Before her time as Empress, Victoria was the Queen of Spring and Guardian to Queen Edane and Sir Beryl Whitehall. She still keeps in close contact with both of her adoptive "children". She is known in the empire for her kindness, fairness and generosity. She is known to take a particular interest in changelings that show particular cleverness or chivalry.

She became Empress in 1997 after the assassination of Empress Anne by a teen-aged boy.

In all her glory. 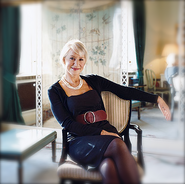 The Young Victoria, Queen of Spring
Community content is available under CC-BY-SA unless otherwise noted.