Gram Thew's life before Arcadia was short and spent during a time of massive strife in Ireland. Gram Thew was born Seamus Kelly in Londonderry Ulster, he was born to Thomas and Catherine Kelly. He has a younger sister also named Catherine. Thomas and Catherine were not poor but also were not well off, the best description would be lower working class. Thomas working in a factory and Catherine working as a domestic in a well off protestant house. Seamus was raised in a house of extreme Catholic faith and raised by two loving parents. At the age of 11 Seamus began working at his uncle Teig's shop to make extra money for the family and to learn a trade, his uncle being a butcher. Around the time that Seamus started to work at his uncle's shop he became aware of the growing animosity towards the english and protestants that resided in Londonderry. The Catholics of Northern Ireland had never had good relations with the Protestants and one could see that going into the winter of 1972 something bad was going to happen.

Thomas had little time for politics, spending most of his life just getting along. Teig on the other hand had enough money that he needed other things to distract him. Because of reasons not known to Seamus, Teig convinced Thomas to bring Seamus to the parade that would instigate the events of January 1972. Thomas, Teig and Seamus were near the front of the march and were thus in the thick of the action when british army opened fire on the crowd later killing 27 people. As the first shots went off Thomas and Teig both protected Seamus and directed him to hide in an ajoining alleyway. There Seamus, in his fear for his life and the lives of his father and uncle, was called to the end of the alley by an alluring voice. That was the last that Seamus knew of this world and Ireland.

Gram was taken to Arcadia at the young age of 12 1972 by Maeve, daughter of Mab. Thats where things went bad. In human terms it could be discribed that Gram was raised to be a courtesan of Maeve. That would be the human term for what happened to Gram.

Some Stuff happened in the middle...

The next thing that Gram remembers is that he was raking his body on the thorns of the hedge, he can vaguely remember that he meant to do what he was doing, and that the thorns do something he wanted them too. Oh, and he is madly in love with someone, if only he can remember her name.

The last part of the hedge that he remembers is having what he thought was a blanket wake up on his shoulders and freak out...then he kicked a priest in the bollocks. Thus his time in Arcadia was done.

Gram bucked against the advice of Mr. Black almost as soon as it was given. After taking psycho-tropic drugs Mr. Black decided it would be best that he be introduced to someone in spring. Gram has taken to the spring court well, it emphasizes the better parts of the things that Gram instinctively knew he had to do in Arcadia. Also, after having lost almost 40 years in the real world and only having popped out at the age of 19, Gram wants to live the life that a teenager is supposed to.

A good description of Gram back in the real world would be a man-child. He lost some of the most important developmental years of a person's life and is trying to pack as much living as he can into the time he has now.

Being Irish in London isn't the major issue it seems to have been in the past, but from time to time it does come up as a detriment to him. Also Gram seems to not have the resentment for the English that he remembers having before he was taken to Arcadia.

Being a courtesan in a past life, and looking for an output for the love that he feels for someone that he cannot even remember has led to Graw working as a "Man of the Night." He's good at what he does, his looks help him alot, so he makes decent money.

One disconcerting thing that is dawning on Gram is that all the political manueverings that go on within Lost society seem to remind him of Arcadia, leading him to think that if Arcadia is so similar to the real world and the lost act like their old keepers, aren't we just trading one keeper for another? 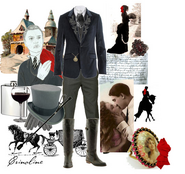 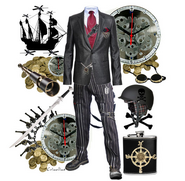 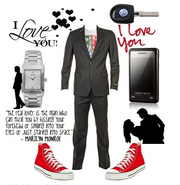 Gram's not-so fancy pants. But they're very popular with the ladies.

One of the pieces made by Nellie 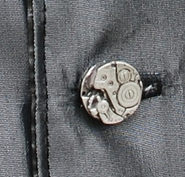 Gram's Spring alliances are demonstrated by this silver embroidery on the back of his vest
Community content is available under CC-BY-SA unless otherwise noted.
Advertisement