George the Dragon (formerly known as King George and known in mortal society as Sir Garnet Wolseley) is the now deposed former King of Summer and former long-time Field Marshall of the Armies of Summer. He was deposed by Percy Harving and Lord Thomas Gage after attempting to eliminate the seasons in favor of a return to the Dawn Court. In a mortal capacity, he is co-owner of Royal Regiment Red.

According to popular rumors, King George was knighted as a mortal and was abducted by his keeper while fighting in the Crimean War. He frequently references serving in the British Army, defending the mortal Empire, and holds those who fought for the mortal Empire in great esteem.

Little is known of the King's time in Arcadia, but rumors state his escape included ripping the still-beating heart of his Arcadian captor from it's chest.

George is a "lifer" for Summer, never considering any other court or calling in the Empire.

He made his name in the Empire in an infamous incident where he tracked his former keeper to a Moor in scotland and, according to legend, murdered the beast in the summer sun, ripping it's still beating heart from the monster's chest.

He served nearly a dozen Kings as Field Marshall of Summer, leading strategic war planning, but never being allowed to take the reigns as King himself. During the Anglo-Goblin War he made a deal with The Dutchess of Pledges to ensure that he would rise to the throne, allowing Mary to kill several rivals in return for his support of her during the Autumnal Coup. At the end of the war, George earned great accolades from his fellow summer courtiers and while the details are unclear, it is widely known that the war was ended by his hand.

Sometime after the war he became aware that he was incapable of being killed heroically in battle- a fate the old king views as being two shades worse than death. Since he has become aware of this fact he has taken on increasingly dangerous risks as King, particularly since the start of King George's War against the Invaders and mysterious Dusk Court.

After the death of his adoptive daughter Princess Margret, George lost what little clarity he had left and started preparing to take over the Empire by force, restoring the old "Dawn Court" to power over that of the seasons. George was quickly deposed after his plan became widely known and he was sentenced by Empress Victoria to go into Exile.

It's not Exalibur, but it'll do in a pinch 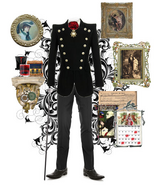 And it still fits!
Community content is available under CC-BY-SA unless otherwise noted.
Advertisement