Perth McMannus is a member of the motley Trouble Ahead. He is near 7 feet tall and has the seeming of an Irish Wolf Hound.

Pert was Hugh and Catherine’s remaining son. They had lost their first born, Patrick, in a fishing boat accident during a winter storm. Killybegs had lost many of its sons and husbands to the sea; yet fishing was all that kept the town in existence. Hugh had worked in the cannery until an accident cost him his right hand. Presently the family lived on a meager pension/disability and the money Catherin made selling hand knit sweaters to tourists. Knowing that life for a 13 year old in Killybegs in 1976 was difficult, Hugh and Catherine sent Pert to live with Hugh’s brother, Michael, who was a shepherd up in the north of County Donegaul. Pert could help Michael with herding and shearing the sheep.

Pert went to Michael’s farm after finishing his school (governmental) term. Michael lived on a farm outside of Carndonagh. Carndonagh, the hub of Inishowen, is a compact thriving town 2 miles from the head of Trawbreaga Bay. The town is dominated by the Church of the Sacred Heart, built in 1945 with some fine statuary by Albert power, RHA, the famous sculptor. The chief glory of the town is the famous Donagh or St Patrick's Cross. It has been dated to the 7th century which would make it one of the very early Christian crosses outside mainland Europe. Just outside the town on the Ballyliffin road you may enjoy a forest walk and picnic in one of Ireland's few remaining natural woods, with its oak wood, birch, rowan, hazel, willow and holly. This fine stand of old oak wood is classified as an area of regional importance.

Pert was a bit of a loner, not by choice but by circumstance. Being so near Trawbreaga Bay, many of the boys his age were working on the fishing boats. Pert liked the outdoors and did not mind herding the sheep. When he wasn’t up on the mountain with the sheep, he would spend time hiking (and running as he was on the school track team) the woods out on Ballyliffin road. It was from there, the forest on the Ballyliffin road, that Pert was taken from the comfortable world he knew to a world of both wonder and fright – Arcadia. His grandmother had warned him rowan trees. She especially had warned him about rowan circles; but, Pert ignored her superstitious ramblings. He should have taken her seriously.

Perth was out for a run in the woods. Having grown weary of his usually route, he decided to take one of the turns off his common track. He was glad that he did as the woods were beautiful. The oak trees formed stately arches overhead as he ran down the path. The path ended in a small glade that was ringed with rowan trees. A brilliant blue sky above was a welcomed change from the dismal grey it had been earlier in the day. He thought nothing of it as changeable weather was common in Ireland. He settled down in a sunny spot and began to eat his lunch which was quickly interrupted by a stately man and his aged Irish wolf hound. Pert waved hello as the couple approached him. The man introduced himself as Kalen and his dog as Patrick. The dog was extremely friendly and energetic which Pert thought odd given the dog’s obvious age. Pert shared some of his lunch with the dog as he spoke with Kalen who revealed that he bred wolf hounds. Pert was particularly interested in this news as he loved that breed of dog. Wolfhounds were breed for protection. As their name implies, they were capable of killing a wolves which surely protected the flock and the shepherd himself. Kalen mentioned that his bitch had just had a litter of puppies and inquired if Pert would care to see them. Pert responded positively at which point, Kalen let Patrick off his lead, telling him to go on home. The dog took off through the woods barking and leaping like a puppy himself. It was odd behavior given the dog’s obvious age; yet. Pert took no notice of it. Kalen and Pert followed the same path that Pert had just run down and took a right onto a path that Pert mush have missed on his run into the glade. So you’d like to see some wolfhound puppies…….

Living in the autumn court was a dogs life. On that long ago day, when he went with Kalen through the brambles to see the wolfhound puppies, Pert never expected to become one of those puppies. By the time they had cleared the Hedge, Pert remembered little of his former life except for his love of running. He looked little like his former self as well for as they walked through the Hedge, Fae magic took powerful hold of Pert and reshaped him into Kalen’s desire – a new pup for the court and the hunt. Kalen always found it humorous to take an young Irish lad to be one of the wolfhounds. He was particularly pleased to find one who loved to run.

Pert started in the kennel with all of the other pups. As time went on, he was trained for the hunting. Kalan approved of his choice when he observed how quick to the chase and dogged Pert was once he caught scent of the prey. As an Irish Wolfhound, Pert made a striking appearance at court. Even as a pup, the breed runs lager and having several of these powerful dogs lounging about court spoke tothe Autumn Court's power.

Pert loved running – the sense of freedom it gave him was somehow powerfully familiar – more than he did fighting. He hated the oily armor’s stench in his nose and the weight it placed upon him. He hated the claxon call to battle and was glad at its seeming rarity. Pert much preferred running while hunting. When he ran, it was always full tilt, nothing held back, race through the woods. At times, Pert wasn’t even following a scent; he was just running. In particular, he loved the yearly hunt, when all the courts would gather for a Wild Hunt. Seemingly for days Pert would run with the Hunt for the sheer joy of running. Much of the time was spent in the kennels although after a particularly good hunt, he was allowed into the banqueting halls. Those times were rare but he was overwhelmed by the beauty and elegance of his captors.

Since his return, Perth has become a member of the motley Trouble Ahead. He remembers very little of his time behind the hedge except for a desire to run and the need to eat from a bowl. He has started studies at the Imperial College of London, where he lives on campus, and gotten himself a job as a delivery man for a fish and chips shoppe on campus. Not making enough money at the chips shoppe, he proceeded to get a job as a bouncer at club Forget.

Perth McMannus is a Player Character. Click here to view his character sheet 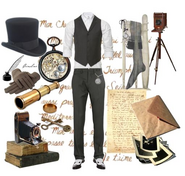 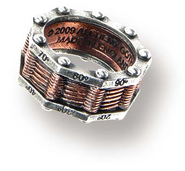