Queen Mary Bloodletter is the fearsome Queen of the Court of Autumn.

Are you going to ask her? Yeah. Thought not.

Mary was a Lady's Maid to Mab, Queen of Air and Darkness, Mistress of the Immortal Sidhe. During this time she indured countless abuses at the hands of her keeper, one of which was being forced to "entertain" other servants so Mab could watch. Among these was Gram Thew.

Before the Anglo-Goblin War, Mary was romantically attached to Prince Martin of Autumn, going as far to claim she lost her virginity in the foyer of Brandywine, Martin's Motley's hollow. During this time, Mary was known as the "Duchess of Pledges" and was leader of a nobel Entitlement called the Conclave of the Wyrd.

During the war, Mary aided King George in ascending to the throne of The Court of Summer by violently eliminating at least one other claimant to the throne. It is believed that during this time Mary started a somewhat romantic relationship with George, though their assignations may have simply been Mary ensuring George's loyalty to her.

In 1998, Mary overthrew the previous Regent of Autumn, King Henry, in a violent coup d'état that resulted in the deaths of most of the Autumnal nobility, including her beloved Prince Martin. This is notable, as all of the other seasonal regents had gained the throne (at least publicly) through "natural" means. Her coup was backed by a group of Summer fighters, including King George who dressed as Blackmasks to frighten their opponents.

Despite her method of achieving the Crown of the Court of Fear, she was accepted by the other Seasonal Courts and the Empress Victoria. While she is often blamed for the death of Martin, she herself has claimed that Martin was her "man on the inside" and assisted in the coup. It is unclear who actually killed Martin (Though The Mirror of History claims to be in some way responsible).

Mary has a complex relationship with the magical underworld of London. She has a strong hold over Shaitana and he regularly gives her bits of memory and soul he culls from The Thorns in return for her not shutting down Knockturn Alley's Goblin market.

Rumor states that Mary is attempting to become one of The Gentry by magical or mystical means along with her right hand Lord Vallum and the other members of The Conclave of the Wyrd. This, like so many other facets of Mary's life, is not known to be true. 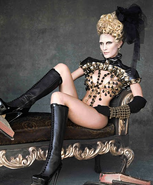 Lord Vallum is a big fan of those boots.

This won't hurt a bit.

Just lie back and think of England, dear.

That wasn't so bad, now, was it?
Community content is available under CC-BY-SA unless otherwise noted.
Advertisement