The Pan is the name given to an Aracadian lord of great power who is infamous for kidnapping young boys from all over the Empire. According to all Imperial sources, the Pan is one of the most active members of the Gentry. His victims have sworn to oppose him, giving rise to The Brotherhood.

Thanks to the Brotherhood, much of the history of the Pan has been preserved in oral tradition and thus was not lost in the destruction of the Second Empire. These stories, passed down among the members of the Brotherhood, state that before the Pan was called the Pan it was known as "The Child-Thief". Old London (in fact most of the world) has many legends of naughty children being stolen and most are now attributed (right or wrong) to the hands of the Pan.

The name "The Pan" first started to be used in the mid-Victorian period after a series of empty graves were discovered in plain sight (but ignored by Mortals) in Kensington Gardens. When the Courts investigated, they were informed the graves were property of "The Pan" and "His Shadow and Light".

Following the publication of the Illuminated Text known as The Little White Bird, survivors of the Child-Thief's realm recognized strong elements of their own torture and imprisonment. Repelled by the growing popularity of the character, the Brotherhood attempted to stop the spread of the book, but were unable to. Recently the details of the illuminated version of the text were unearthed by the members of Trouble Ahead.

Following his "death" at the hands of the members of Trouble Ahead, the Pan converted into a goat-legged and goat-horned image of the Greek god Pan, far more fearsome and threatening seeming than the simple child he appeared as before. As a part of this transformation, the Shadow and the Light (see below) seemingly merged with this new Pan. It is unknown why this occurred or what fresh horrors it portends.

The Pan has many assistants, minions and slaves. These are the most notable:

A ball of whirling, burning death, the Light is frequently associated with the J.M. Barrie character "Tinkerbell", though none who have faced it would give it such a name. To members of the Brotherhood it is known as "The Light", an embodiment of the eternal Summer sun that the Pan basks in. With the light around the Pan has the power of the noonday sun at it's back, a horrible offense to the members of The Court of Summer who frequently call upon lesser forms of this power themselves.

The Pan's disembodied shadow, this creature acts as the Pan's silent stalker and assassin. The Shadow is almost always seen before the Pan, clearing the way for his master and his Light.

Adult humans reduced to barbarism, the Savage Ones come in many forms. Native peoples expounding the worst stereotypes, brutal pirates pillaging empty villages, men transformed into neanderthals, the Savage Ones conform to the Pan's idea of "Adulthood" -- a brutish, short, and bloody waste of life.

Savage monsters that were once children, the Feral Ones are what happens to children that spend too much time "playing" with the Pan. Reduced to nothing more then the creatures they were once forced to pretend to be, the Pan can unleash horrid chaos by unleashing mindless Feral Ones upon the city.

Made up of former slaves to the Pan who escaped The Brotherhood now opposed the Pan and swear to protect children from abduction to Arcadia at any cost.

Little Boys who Live in Trees 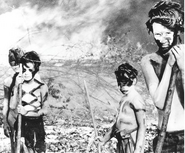 And now you lose the game